Like mother, like daughter, O’Naturelle (3 f O’Reilly – Naturo, by Postponed) emulated her dam with a winning debut in The Cambridge Stud Maiden 1200 metres on 19 August at Taupo.

Naturo followed her first up victory as a two-year-old at Trentham, winning the Matamata Breeders’ Stakes (Gr. 2, 1200m), and later the Highview Stakes (Gr. 3, 1200m), was joint second filly on the 2005-06 2YO Free Handicaps, before succumbing to injury when favourite for the 1000 Guineas (Gr. 1, 1600m) in 2006 and her career ended prematurely after winning three of only six starts.

"She was going through an awkward stage prior to the Easter Yearling Sale in Sydney, and after being broken in was still a bit immature for the Ready to Run Sale, so we took our time with her.

"She’s only still learning but seems to have a lot of natural ability,” said Munro, who with Chapman tried to watch the race while inspecting stallions in the Hunter Valley but were unable to get a signal.

"It will be a good confidence builder for her,” he said.

Jamieson Park had the good fortune to acquire Naturo for $200,000, in foal, at the 2011 New Zealand Bloodstock Winter Mixed Bloodstock Sale.

"The mother (Naturo) was an extremely brilliant filly before doing a tendon in the 1000 Guineas and this foal (O’Naturelle) was an outstanding type and a better type than the mother.

"She wasn’t ready to do anything as a two-year-old and had just the one quiet trial which she won quite easily and she’s just done things on natural ability,” said Munro

A fifth foal, O’Naturelle (boasting a Northern Dancer cross) had looked very good winning both her trials, in April and August at Te Teko, and there was a classy element exuded as she ranged up to win in the hands of jockey Matt Cameron.

Able to position handily from barrier five, O’Naturelle found space to settle into a gap (fifth) at the 700m and although standing the leader three lengths when straightening for the short run home she got into stride at the 200m and showed a nice bit of stretch over the concluding stages.

Cameron was allowed the luxury of buttoning off in the last few bounds, given her momentum, and the half-length victory was convincing.

"She didn’t really handle the track that well at all,” said Cameron. "It’s a tight turning track and she’s got a massive stride on her too, so she just scrambled a bit around the turns and took a bit to get on the outside leg to really let down, but the last one hundred metres was pretty special.

"Once she gets on a bigger track over fourteen, a mile, even two thousand metres, these fillies’ races, it’s going to be huge for her and going down south for the Guineas will be huge for her down that big, long straight.

"She’s a filly on the way up,” said Cameron.

Co-trainer Jamie Richards said: "I was a little bit worried when she came down the hill (rounding the home turn) but she really attacked the line hard and she’s a filly with a lot of promise.

"She’s got a very long stride and we’re not sure that Taupo really suited her, but she’s going to be better the further she goes as well.”

Richards, fresh from winning the premiership last season with co-trainer Stephen Autridge, said there are plenty of options ahead for O’Naturelle.

"She could go south early for races like the Canterbury Belle, or stay up here for the Gold Trail, or the Sarten, or something along those lines. But, a mile [1000 Guineas] around Riccarton in November would be beautiful.

"She’s high-class and I would like to thank James Chapman for giving us her to train, and I know David (Ellis) worked really hard to get the filly for the stable.

Having already purchased Lady Iffraaj (Iffraaj), from Naturo, for $27,500 at the 2014 NZB Premier Yearling Sale, from the draft of Jamieson Park, Te Akau principal David Ellis had been taken by the appearance of O’Naturelle.

"I’d seen her in the paddock when we were doing our yearling inspections,” said Ellis.

"What a gorgeous filly she was, and we were thrilled when they chose Te Akau to train her.  James Chapman is a breeder that breeds really good, sound, horses and just recently I bought a Darci Brahma filly in the paddock from him, and Sam Munro is one of the best stud managers in New Zealand.

"Steve and Jamie have done a tremendous job, while being very patient with O’Naturelle, and now she’s on her way to the 1000 Guineas,” said Ellis

A year older than O’Naturelle, Lady Iffraaj is putting together a tidy record for trainer Mark Walker in Singapore. Fortuna owned, she has won twice and not been further back than fourth in all but one of her thirteen starts, and accumulated $129,408 in prize money.

With only a couple of horses presented in the new season, thus far, by the stable, it was good to get underway.

"That’s our first win for the season and historically we have had our first win at this meeting, so it’s onwards and upwards,” said Ellis.

O’Naturelle was strapped by Nicole Shailer. 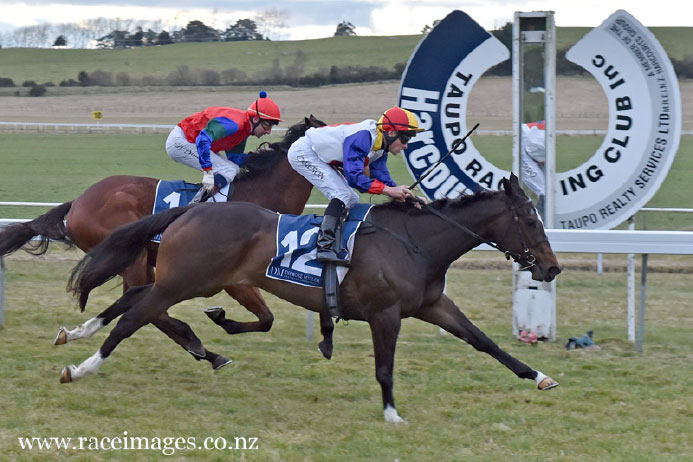